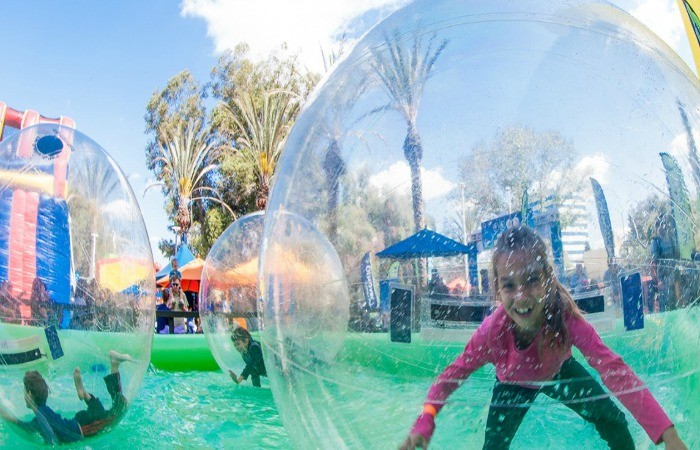 Discovery Cube invites Southern California families and all budding bubbleologists to spend spring break at the 21st annual Bubblefest, a festival featuring bubble scientist and performance artist Deni Yang. This hands-on exhibit has been the most popular attraction at Discovery Cube for two decades. Bubblefest will run April 1 to April 16, 2017 at Discovery Cube’s Orange County campus.

“We’ve popped the science of bubbles for 21 years and find there are new things to learn every year,” said Joe Adams, CEO, Discovery Science Foundation. “This is one of our most-popular events because it allows people of all ages to immerse themselves in the wonder of bubbles. Bubblefest brings out the kid in all of us while enabling guests to explore the science behind the shape, longevity and colors of these rainbow-hued globes.”

The highlight of the festival will be a 45-minute Mega Bubblefest Laser Show production at the 10,000 square-foot Julianne Argyros Showcase Theater. Famed bubble scientist and performance artist Yang will lead the viscous variety stage show, which will combine music, lasers, lighting effects and bubble artistry to create a spectacular experience for all ages.

Yang – a second-generation bubbleologist following in the footsteps of parents Fan and Ana, who are Guinness Book of World Record holders and inventors of the Gazillion Bubbles Show – has wowed audiences around the world with his hypnotic stage performances. Bubblefest goers will see him blow bubbles of all shapes, sizes and colors – some filled with swirling smoke and others seemingly dancing and rotating in mesmerizing displays of visual artistry. He also will invite a few lucky youngsters on the stage during each performance to participate in various bubble tricks.

Bubblefest will also feature water spheres, a bubble zone for guests of all ages and other bubble-focused educational experiments, including interactive activities for early learners who are 5 years old and younger.

The festival will pop into Discovery Cube in Orange County on April 1 and run through April 16, 2017. General admission ticket prices are $17.95 for adults, $12.95 for children ages 3 to 14, $14.95 for seniors age 62 and older, and free for children 2 years old and younger, plus the pre-sale Bubblefest add-on ticket price is $5 for members and $7 for nonmembers. Beginning April 1, 2017, all Bubblefest add-on ticket prices will be $10. General admission tickets include all Cube interactive exhibits, and Bubblefest tickets provide admission to one Mega Bubblefest Laser Show and all bubble-themed exhibits and activities. Discovery Cube is open daily from 10 a.m. to 5 p.m. Tickets can be purchased online or upon arrival at the Discovery Cube entrance.