The Grinch, Harry Potter And The Holidays, Oh My! | Burbank Mom 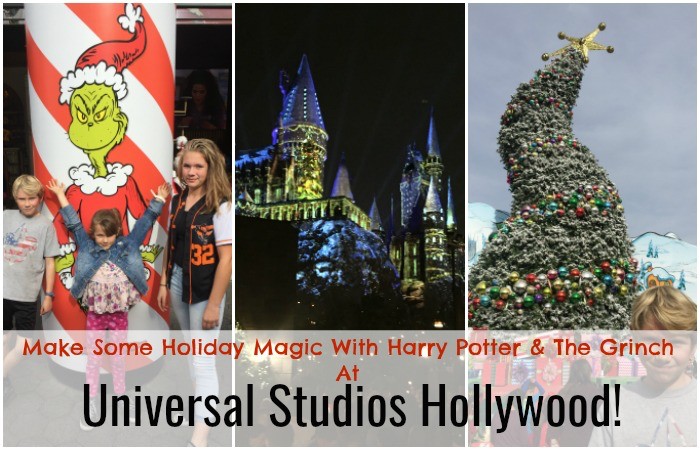 Disclaimer: We received a fun experience at USH in exchange for our honest review…and it’s a good one!

This year, for the first time, Universal Studios Hollywood has Christmas in the Wizarding World of Harry Potter and seriously, the best display of Christmas spirit through their Grinchmas celebration!

If there’s anything I’ve learning about working with Universal Studios Hollywood this year, it’s that they are truly dedicated to good deeds and service actions in their community! At the Whoo-ville post office, your kids can participate in the “Grow Your Heart 3 Sizes” campaign. When they share their good deeds on a postcard and mail them to The Grinch, Dr. Seuss Enterprises, L.P. and Random House Children’s Books, the publishers of Dr. Seuss’s How the Grinch Stole Christmas!, will pay it forward by donating a book to a child in need through First Book on behalf of the sender.

My kids were super impressed with Story Time with Cindy-Lou Who – Cindy-Lou Who and her Who friends gathered guests of all ages – tall and small – for an engaging storytelling show of Dr. Seuss’s How the Grinch Stole Christmas. 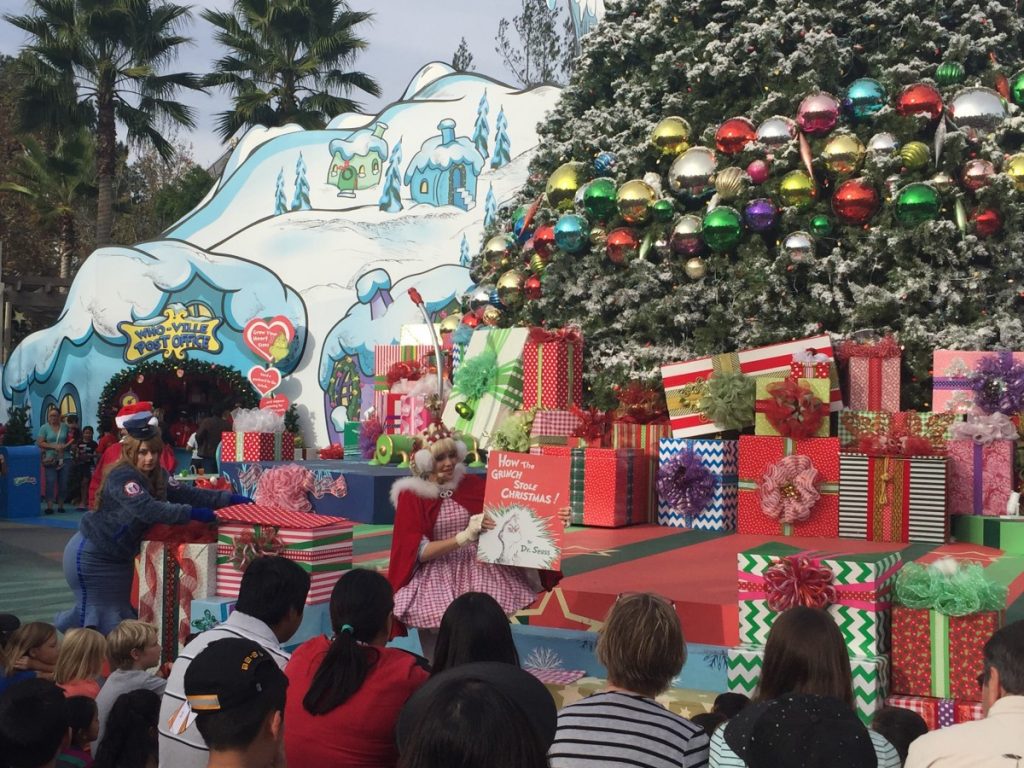 And she had the whole thing memorized! Okay, it was my husband that was impressed with that one.

There are also Who-liday Performances – Martha May Who-vier and the Who Dolls  take center stage by the “Grinchmas” tree, performing energetic musical sets to usher in the Christmas season in style. The Who-liday Singers – a hip boy-band ensemble – will perform nightly a cappella concerts featuring a mix of Christmas favorites and pop rock. 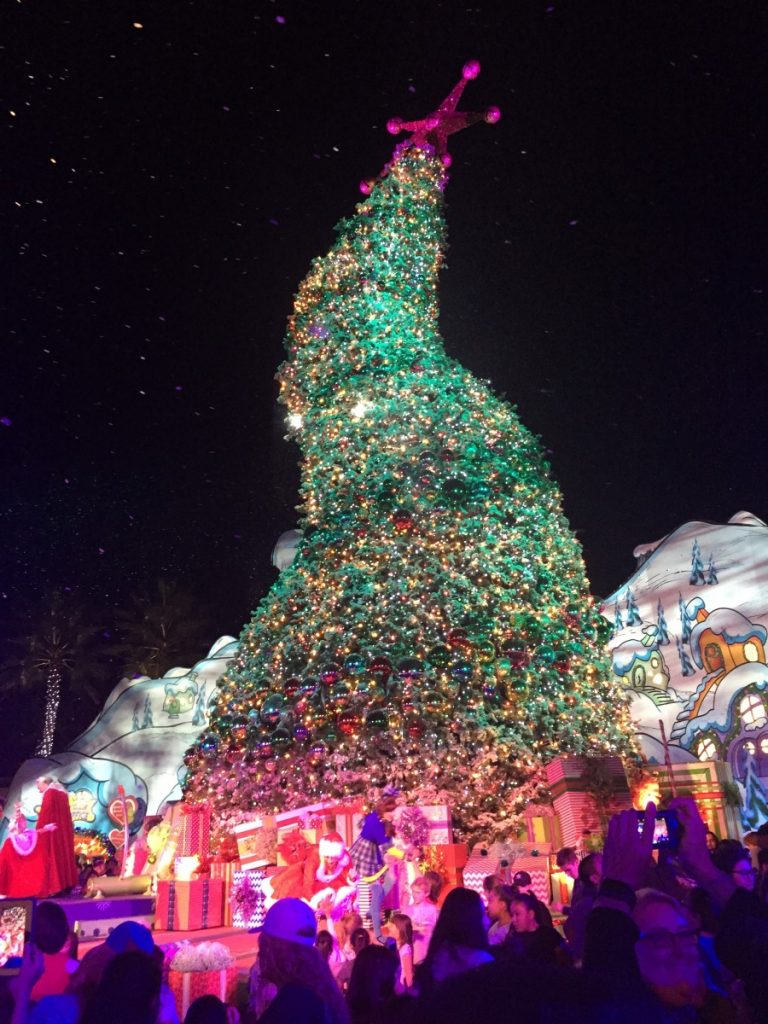 And don’t you dare forget about Christmas in The Wizarding World of Harry Potter! 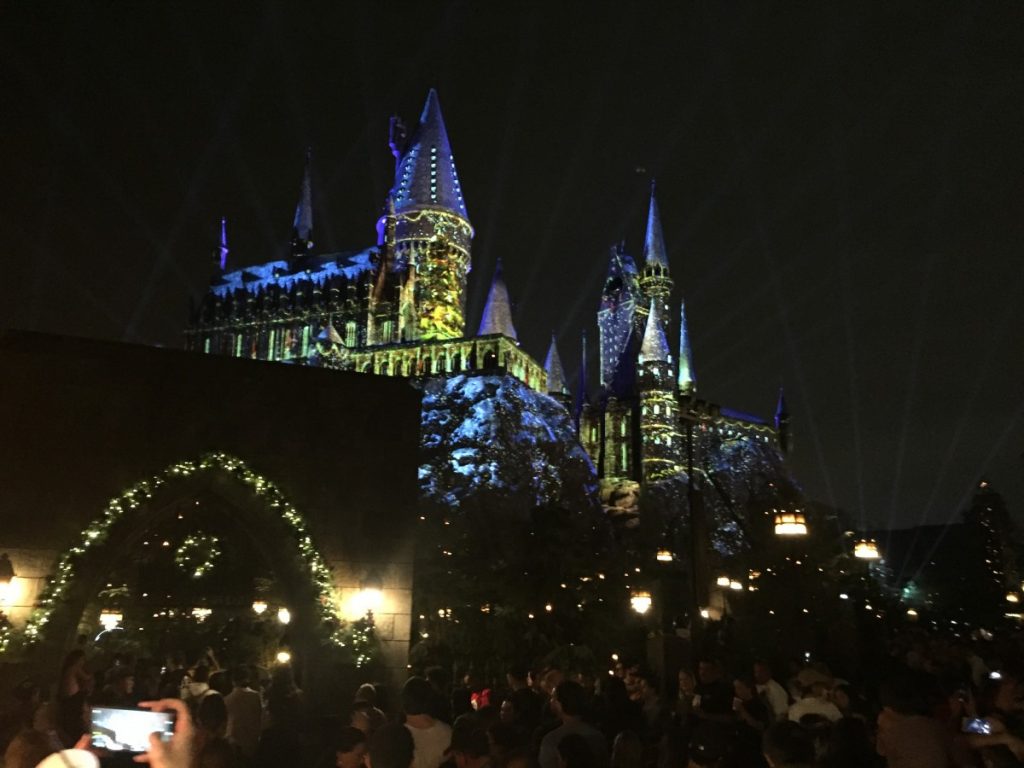 This is a brand new event for Universal Studios Hollywood and they ‘knock it out of the Quidditch arena’!

The all-new “Christmas in The Wizarding World of Harry Potter” experience resonates throughout the immersive land this yuletide season transforming the iconic Hogwarts castle into a dazzling light projection spectacular, while the quaint town of Hogsmeade village shines brightly with décor uniquely themed to each of the individual storefronts.

There is a feast for kings in the Holiday Diner! Featuring scrumptuous roast turkey with gravy platter that includes pigs in blankets, a medley of vegetables, braised red cabbage and roasted potatoes served with cranberry sauce, along with Christmas Pudding. Note: My family ate this dinner so fast, there was no time for beautiful photos…so, I politely borrowed one from USH.

And PS…Warm Butterbeer is magic in a cup. FYI. 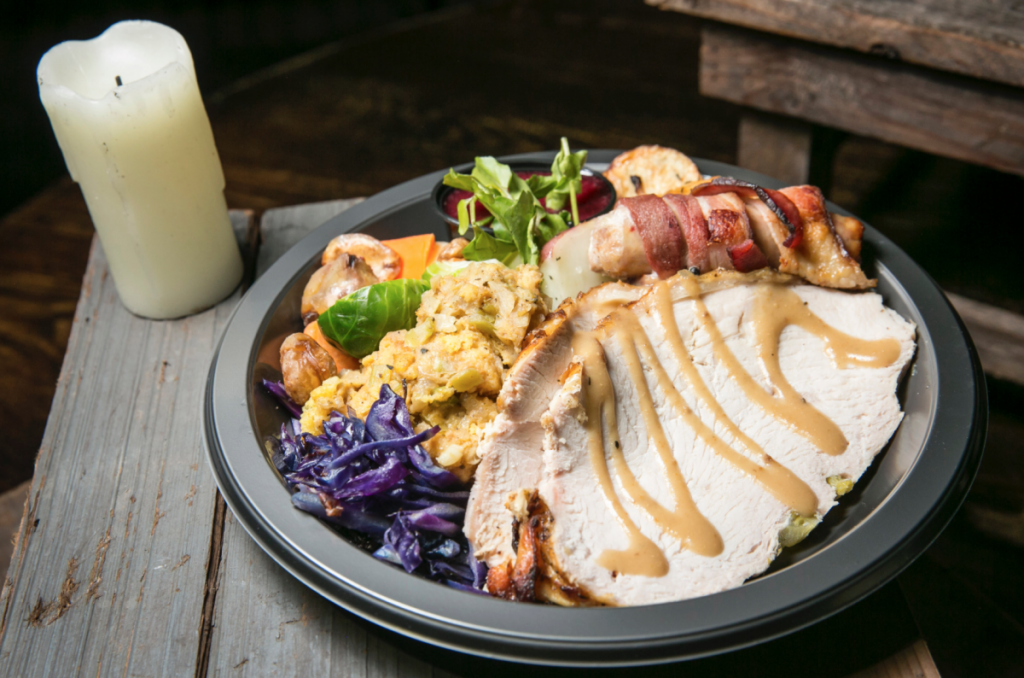 As night falls on Hogsmeade village, the familiar sounds of Harry Potter music will resonate throughout “The Wizarding World of Harry Potter.”  Multiple times an evening, colorful projection mapping will illuminate Hogwarts School of Witchcraft and Wizardry with “The Magic of Christmas at Hogwarts Castle.” 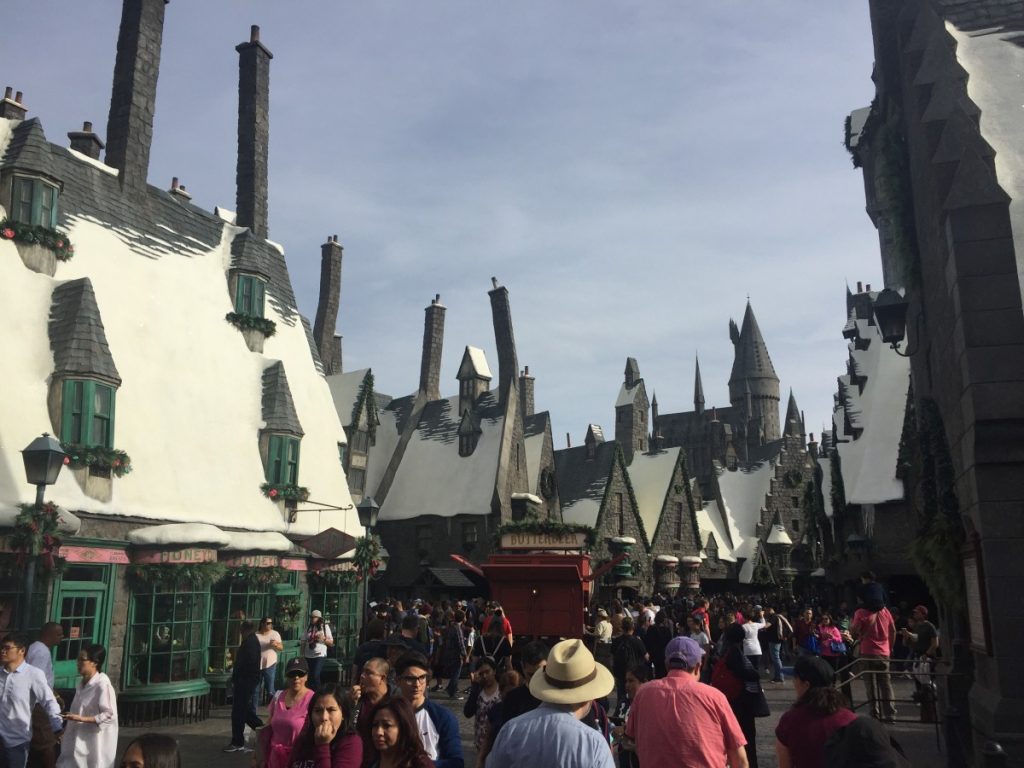 The a cappella Frog Choir, comprised of Hogwarts students and their giant throaty frogs, will also perform original holiday themed songs over the course of the seasonal event. 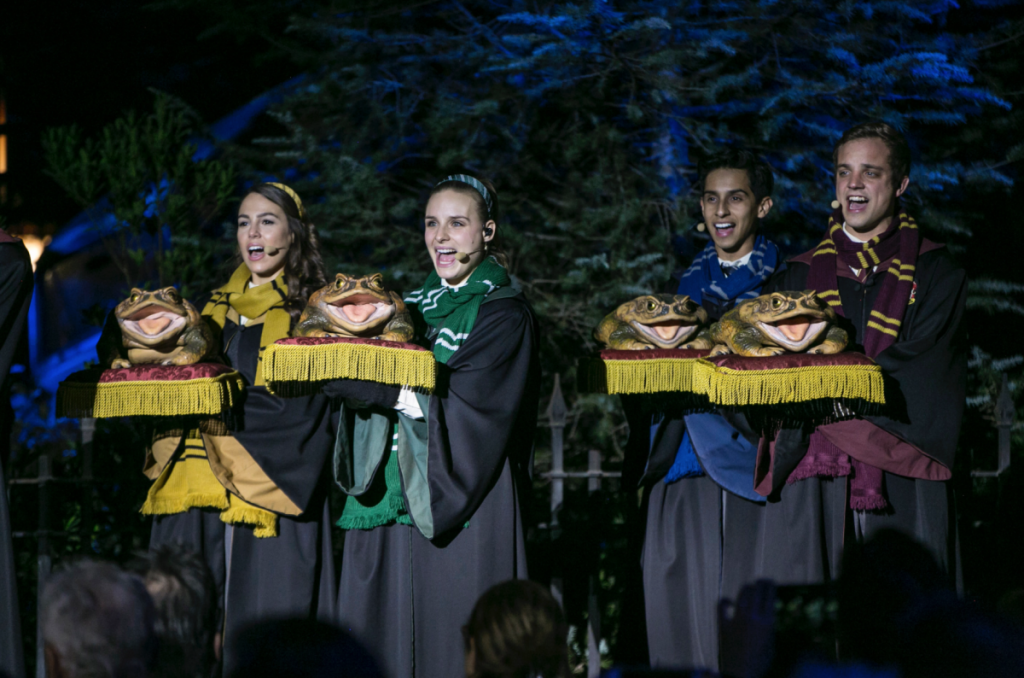 The Grinchmas Celebration is going on now through December 31st and The Wizarding World of Harry Potty will be celebrating the holiday through January 7th!

To get your tickets to enjoy the holidays at Universal Studios Hollywood, visit their website here! 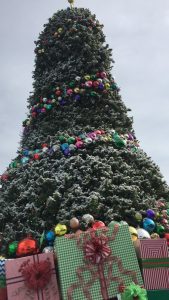 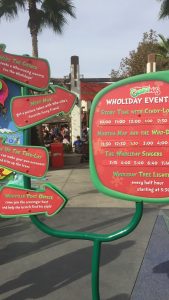 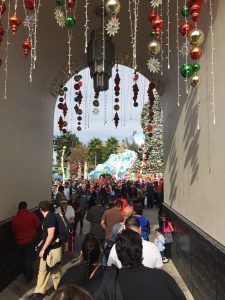 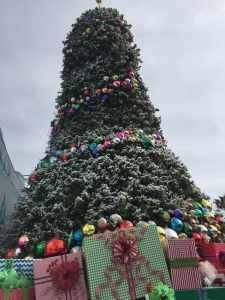 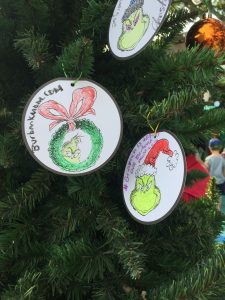 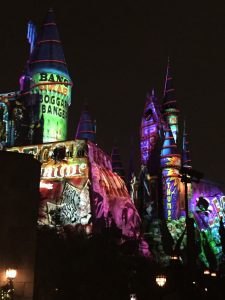 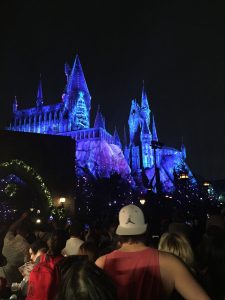 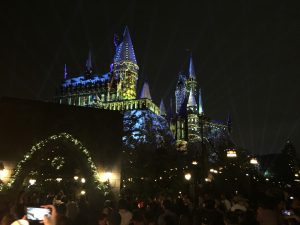