UPDATE: This offer has sold out! It was a good one, after all. Please click HERE for tickets at full price. (They’re only $10…and it goes to charity anyway) Have fun! 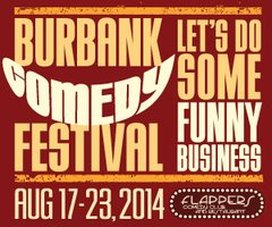 If you’ve never taken your kids to Flappers’ 2 Milk Minimum… you should! And BurbankMom has $5 tickets for you to enjoy a great lineup on August 23rd.

The Burbank Comedy Festival is pleased to announce the 2 Milk Minimum Showcase with host Michael Rayner (Sesame Street) presenting comedy for the whole family, including performances by 10 and 11-year-old stand-up comedians at Flappers Comedy Club and Restaurant, Saturday, August 23 at 4:30 PM.

Rayner performs his juggling show all over the world and on TV including The Late Show with David Letterman and Sesame Street. He combines years of stand-up with amazing juggling feats to create a vibrant and hysterical show that both kids AND their parents will enjoy.

Rayner will be joined by 10-year-old Neil Aggerwhil (Hollywood Improv, Standing Tall Comed, The Warehouse). Aggerwhil started making people laugh at an early age by telling jokes and doing impressions. In fact, his first impression was that of a crying baby. He surprised his family by volunteering in a show in Virginia at age 4. The audience went wild and he won $25, which is more than what anyone in his family had made doing stand-up till that time. Aggerwhil loves to perform improv, and has trained at Second City. He also enjoys performing musical improv and sketch comedy.

The 2 Milk Minimum Showcase also includes 11-year-old Trista Mann. Mann is a young girl who likes getting big laughs. She is a very creative young comedian that enjoys doing stand-up. Although she is just starting out, her original writing and perspective on life will make the whole family laugh.
She connects with all age groups as she shares her unique since of humor.

The festival is dedicated to discovering America’s next comedy superstar.
By pairing emerging comedians with established headliners, the Burbank Comedy Festival is intended to give the next generation of talent the opportunity to perform and connect with top entertainment professionals, to encourage live comedy, and do some funny business.


Full schedules and descriptions are available at http://burbankcomedyfestival.com.