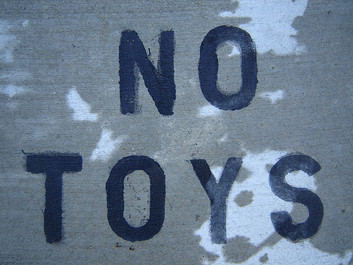 Upon returning home from vacation, I’m catching up on some Burbank things…and the removal of the toys from Lincoln Park seems to be what is on most Burbank Moms’ minds right now.
I’ve received a lot of emails asking if I know anything about this.

But, after having just read the Burbank Leader‘s article (and comments), it seems that the overwhelming majority of park goers do not want to see the toys removed from this park.

That goes for me too.

These toys are actually a main reason to go to the park! I would LOVE to know what the actual statistics are of children getting hurt playing with these toys….and how many go after the city?

Kids get hurt. They get hurt all the time. Watch all three of mine for 7 minutes..it’s nearly a guarantee.  It’s going to happen on those slides they have there, the swings, the free standing climb structure…heck, it will even happen while they’re walking on the sidewalk.

BurbankMom.com reader Kat Olsen said, “I mean obviously, a fall from a 4 or 5 ft. high opening in a play structure creates a far greater danger than the tumble off an 8 or 10 inch tall plastic toy. The ride-on and push toys create great opportunities for exercise and practice in sharing. The park wouldn’t be the same without them.”

I agree with Kat, and also do agree too many might be too many. Via the comments on BurbankLeader.com, some residents have a fear of a “dumping ground” thing going on….but when you live in a city where there is actually a park that has toys ready to go, it’s a win/win for most families around here.

Kat also wanted to share with all of you that “for anyone who would like to have a greater impact, public comments are accepted at city council meetings. The next meeting will be held Tuesday, 8/20 (the night before the toys are set to be removed) at 6pm at on the 2nd floor of City Hall, 275 E. Olive Ave.”

Dumping? I’m not so sure that’s the right word.

If you want to contact the city on this issue, write to them at CityCouncil@burbankca.gov!