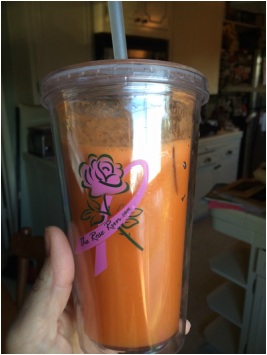 The first juice I tried.

If you have no idea why I’m writing this post, read this first….


You see, I had a crazy idea, and at the time, I was all in. I watched the documentary, Fat, Sick & Nearly Dead and the next day got a juicer at Costco and everything I needed at Sprouts for a 10 juice fast.

I was pumped. I even watched the documentary a second time that evening just because I was so pumped.

Then the morning came. It was a Thursday and I was ready. The hardest part was skipping coffee making process. I drink coffee all day long, basically. I wasn’t sure how this was going to play out, considering I am so tired all of the time. I was certain I’d be asleep by 2pm.

With no coffee, I opted for hot water with lemon.  So far, so good.
Journal entry to follow….. 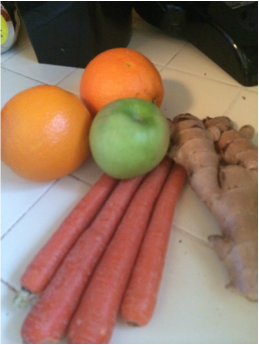 Today was a difficult day that I didn’t make it through. Basically by 10am, I was daydreaming about cheeseburgers. I had my two cups of hot water and lemon when I got up, forgoeing the coffee I hold so dear and then had a carrot-orange-ginger juice for breakfast. All was well until I had to drink that Mean Green for lunch.

I couldn’t finish it.

As a matter of fact, it did me in. I was starving but the thought of drinking a juice was making me close to vomiting. That’s not even an expression. I was going to vomit. I made myself a second juice, something red like the schedule suggests. So, I went with Tomoato, spinach, red bell pepper, etc.
Nope. Coulnt get it down.
I tried the green Naked juice I had in the fridge called Green Machine…nope. Gag reflex. Couldnt do it.

It doesnt help that I started my period yesterday (TMI?) and the side effects from that process were fighting against me. I had been suffering from a terrible headache since last night and all day today it got worse, I even tried laying down for 2 hours…to no avial.
Headache still there. And because I was ‘jucing’ I refused to take any Advil.
Water!  I wasnt drinking water. So, I started to drink my water.
Gag reflex even at the thought of putting more liquids into my system.

By 4:30pm, I was on the phone with my sister basically telling her this was not for me.
By 5pm, I told my son, ‘this is probably how most people feel at this point doing this.’

Then I had to eat.

I started with 2 boiled eggs and raspberries.  Then I moved on to Pretzel Crisps and brie.
Then I had a piece of chocolate.
Then I ate spaghetti for dinner with my kids.

Failed. Bombed. Binged.
Basically, I was getting back at the ‘juicing’ and retaliated.

I went to bed thinking I couldnt do this and upset at myself that I had failed.
But the conversation with my sister changed my mind….
Maybe I need to reevaluate what I’m doing and not start over, but try again tomorrow. 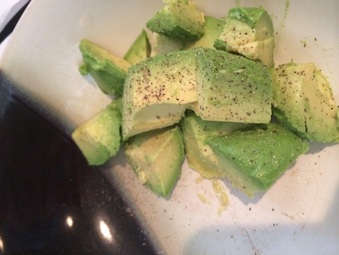 Avocados. I’m obsessed with them.

I woke up this morning realizing that I had gone cold turkey on everything.
The coffee, the sugar, the junk, etc.
It is suggested that you give yourself a week to detox from the things you were really going to detox from…and I did not do that.
This morning, I decided to skip the coffee again and start there, with my water and lemon again.

So, I did. and it was the right thing to do. I had been drinking so much coffee, the caffeine had a hold of me.
I Googled a bunch of stuff this morning and what I realized is I’m not the only one who was nearly vomiting at the thought of the juice after drinking the green…
And I’m not the only one who might not be able to just juice.
I think a few bananas and avocados are in my future.

So, I’m not quitting, I’m not starting over..I didn’t fully fail, and today’s a new day.

By the end of today, I realized that I’m going to have to take this slow. An overnight change like this is not going to work for me. I called my sister back and let her know that I didn’t quit and I am going to commit over these next 7 days to incorporate 2-3 juices into my everyday diet, just to get used to drinking juice. I was not going to commit to not eating chocolate or other junk…I was just going to incorporate juices.

Having not had coffee for three days now, I noticed something really amazing today. I went cold turkey on coffee and to my complete disbelief, I am LESS tired NOT drinking coffee. Maybe it’s all the fruits and veggies? Maybe. But, this coffee thing is surprising me. I’m sad, a little. But I’m pretty sure coffee is a want, not a need. I’m certain of that today.