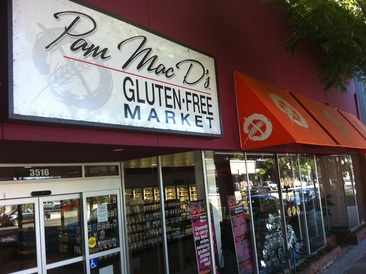 If you were to look up the term “Gluten Naive” in the dictionary, you’d see my pretty little face right next to that definition. I’d be smiling at you innocently in my own little world with no clue what gluten is, why it’s a big deal and why so many people are paying attention to it these days.

Okay, so that’s probably not a real term you would find in the dictionary, but nonetheless, I am very naive when it comes to the world of gluten. I guess I’ve thought it’s something I don’t need to pay attention to since I don’t have Celiac Disease or an intolerance to gluten. But that might not be as true as I had once believed.

I recently visited Pam MacD’s Gluten Free Market on Magnolia Blvd to talk with store owner Pamela MacDonald. Oh..you didn’t know there was an entire store of gluten free products here in Burbank? Well, me neither. But there is and I think it’s pretty spectacular. 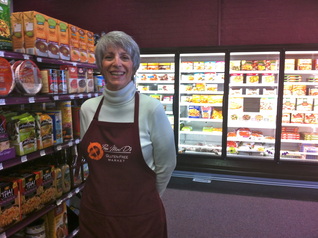 The lovely and ambitious Pam MacDonald
Pam Mac Donald was diagnosed with Celiac Disease when she was 38 years old and she said like most newly diagnosed people she was told to go to Whole Foods… where she didn’t find much. Pam says “1 in 133 Americans have Celiac Disease and 95% are undiagnosed.” She had met many confused people reading labels in the gluten free section of Whole Foods and thought there’s got to be a better way.
And Pam MacD’s was born. Pam and her Executive Director, Justin Hall, have seen it all the way from conception to execution and this market is now here and readily available for anyone.

“Gluten is a protein found in wheat, barley, rye and some oats. It is the hardest protein for our body to digest. To some extent, we are all gluten sensitive but for 1 in 5 people in the United States, they are Gluten Intolerant, and the reason you’re hearing more and more about it is because of the size of the wheat is larger. It’s a GMO (Genetically Modified). I’m 60 and it’s not the wheat I grew up on. Because so much of our food is processed, wheat is used as a filler…a binder. It’s in fake mashed potatoes, potato chips…soy sauce has wheat..the processed pre-packaged deli meats have gluten.”

Celiac disease is an absolute diagnosed disease whereas Gluten intolerance is more like have smaller symptoms when you eat Gluten…such as migraines, bloating..”foggy brain”.

Pam says “Some people eat gluten and they’re sick for days. For those of us that cant eat gluten, it can manifest in a lot of different ways..there’s Celiac Disease. But what also happens is areas of hematology, endocrine..skin, neurologic, gastrointestinal  areas, you’ll have a disease, and because of the inflammatory aspect of the gluten, it will exasperate the disease.” 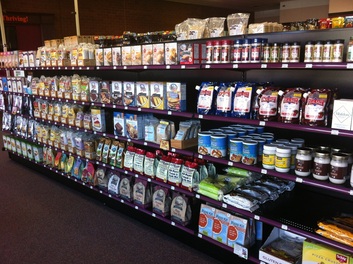 They have an inventory of 1300 items
I have personal experience with a dear girlfriend with two children on the Autism spectrum, and know the difference a gluten free diet has made in her kids. It’s remarkable, actually. Of course in our conversation, the hot topic of Autism came up.

“They’re finding with anecdotal evidence that kids with autism are helped with a gluten free diet.” says Pam. Pam also makes it clear to anyone coming in the store, they are not doctors. They do not diagnose anyone who comes in asking questions about their own health, but they are all informed and can give just that…information. 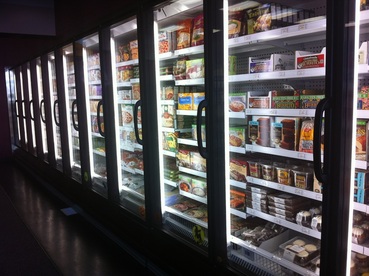 11 freezers full of gluten free items.
The majority of shoppers coming into her store are moms, she says. Women 27-45 are her highest traffic. “We have shoppers coming in from outside of a 10 mile radius to shop here. The comment I get the most is, You mean, I don’t have to read the labels? I get hugged, I get thanked. We have 11 freezers of gluten free food. We’ve got 1300 items. You’re just not going to find the variety elsewhere.” 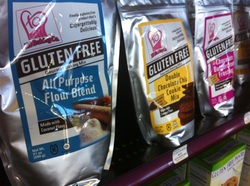 A top selling product in the store.
Pam MacD’s does not carry everyday staples such as fruits, veggies, Milk and eggs. But for the highest requested gluten free products and beyond, you’ll find them here. Breads, pastas and desserts are the obvious items, and you’ll find a wide variety. 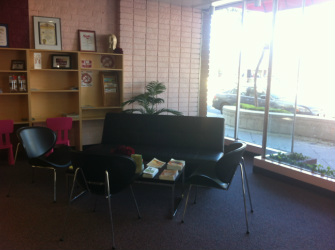 Relaxing area for your children or self to sit for minute.
I highly suggest you make a stop to this store, especially if you or anyone in your family are living a gluten free lifestyle. You do not have to read labels here. It’s all gluten free…every single item. The store is comfortable and inviting. They’ve even created a space for your kids to hang out while you shop…not to mention a nice area where you can actually come in, purchase a tea and use the free wifi prior to shopping…maybe you needed to look up those ingredients you needed?

Pam, her Executive Director, Justin Hall and their staff are knowledgeable and friendly on all things gluten. This is definitely another lovely gem in the city I love so much.

As Pam says….”There is life after wheat.”