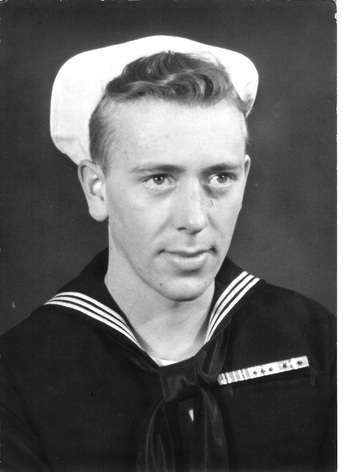 My Grandfather at 17 entering The Navy

When I was newly married, I got wind of something my grandfather had lived through in WWII. My father, his son, is one of nine children and they all knew their father was in the war, but details were merky due to his lack of speaking about his experience.

This is not uncommon in WWII veterans.

I was curious, so I began to dig a little deeper, and what I discovered was amazing. My grandfather had survived a kamikaze attack in the Pacific that he should not have survived.

He was on board the USS Laffey, a small destroyer set in Radar Picket Station 1, headed into battle. Now, you might not know what I’m talking about when I say that, but basically, what it meant, was that the ‘tin can’ he was on with roughly 130 other men was on the front line.

The destroyers placed in the front lines like this were not meant to actually destroy what was in their way, but to do damage and take the brunt of the fight so the bigger ships, like the Carriers and Battleships can come through.

The USS Laffey took more hits than any other ship in WWII and did not sink. As a matter of fact, it was nicknamed The Ship That Would Not Die. 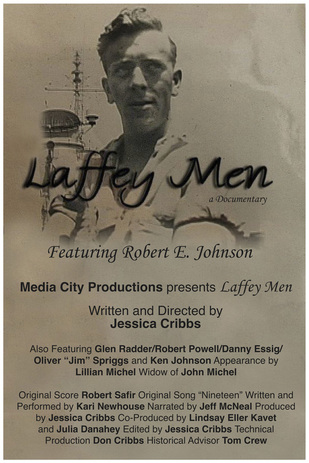 This is my grandfather aboard The USS Laffey

When I discovered all of this, I decided to make a short video to help my family understand what our Patriarch had gone through.

My two minute video turned into a 30 minute Documentary, called Laffey Men. I ended up flying to Charleston, SC to visit Patriot’s Point. The USS Laffey is now part of a maritime museum there. I went to a USS Laffey Reunion and interviewed 4 other survivors of that attack on the Laffey.

It’s no Academy Award winner, but it doesn’t need to be. The story is solid. I held a Movie Premiere in Toledo, Ohio for my grandfather. He received a standing ovation in a full movie theatre full of family and friends. I had movie posters made, and he signed autographs for hours!

The documentary was an official selection at The Cleveland International Film Festival and a Shorts Festival here in Santa Monica. The blessings came when a local award winning composer volunteered his time to compose the entire film. A singer/songwriter friend wrote and recorded an original song for the film and because of my time working with voice over artists, Jeff McNeal narrated the entire thing…voluntarily!

The blessings surrounding this project were amazing. 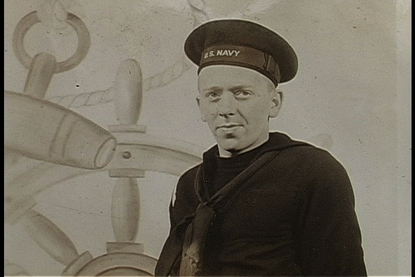 But the most amazing thing for me was getting my grandfather to sit and talk with me about this devastating experience.

He unknowingly saved details all those years, just for me. It was hard for him, very hard. But, we have his story now, and forever.

He would frequently say “Jessie, I don’t know why you’re doing this!”
And I’d reply every time, “Grandpa. If you didn’t survive that attack….I wouldn’t be here.”

Remember why we celebrate this weekend! Happy Memorial Day!

For more information on Laffey Men, visit LaffeyMen.com. You can share this project with the Veterans in your life. In memory of my grandfather, Robert E. Johnson…and all veterans who have served, survived, perished or
are still serving.