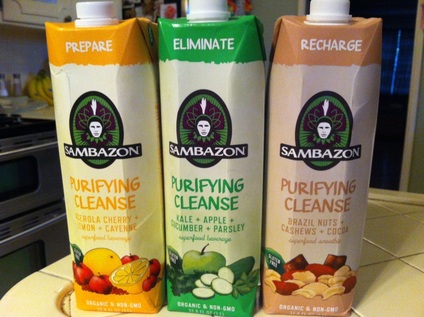 No, really. I think the product is actually tasty. My least favorite of the three flavors was the Brazil Nuts, Cashew and Cocoa flavor, which surprised me because it has cocoa. I was genuinely surprised how much I enjoyed the taste of the Acerola Cherry, Lemon and Cayenne and even the green drink! (Kale, Apple, Cucumber and Parsley).

I did not fail because of this product. I failed because my heart wasn’t in it. I would certainly try this cleanse again, especially for the price of $15 at Costco. But before I do that, I have to be sure I’m prepared….mentally. On the first morning, I was pacing in the kitchen by 10am anxious to do the next step.

Basically, I have an issue with food.

Which is why I wanted to do a cleanse.

My will power had obviously been kidnapped, handcuffed and shoved in a closet somewhere. I couldn’t resist the temptation to eat (beyond what was on the suggested menu with the cleanse). I almost feel that a cleanse with no food at all would be better for me. Obviously a cleanse like that would not be suitable for several days. Even the idea that I could have a little with the cleanse made me focus more on the food than the cleanse.
Again..not Sambazon’s fault. I was too desperate to start the cleanse, so I didn’t fully prepare for it.

I’ll try again soon. And I’ll be sure to let you know if I manage to do it.