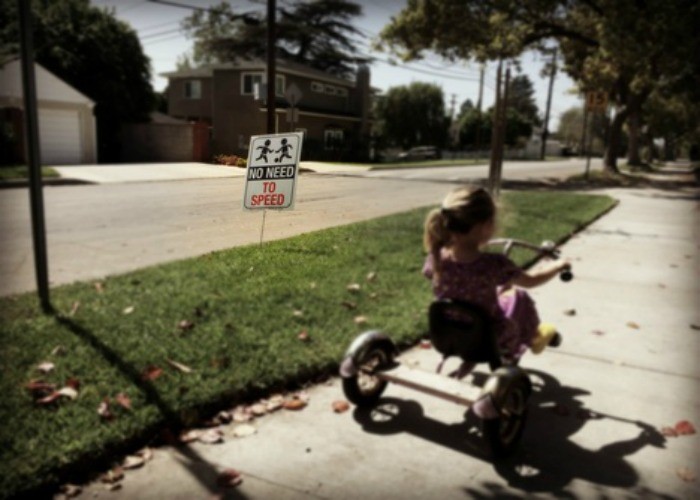 Hello Burbank Parents! I don’t actually live in Burbank, but I do live in LA and love our weather…It blows my mind that our kids can play outside nearly every single day of the year!

However, I have become very frustrated with my own community’s lack of sidewalks, high speed limits and speeding humans. I know that most of Burbank has sidewalks, and how lucky you are, but I also know that a few Burbank moms I have talked to complain that people are driving too fast through residential neighborhoods.

I started a site called Fix The Toaster because I believe that if another modern invention, say the toaster, was killing roughly 30,000 Americans (not to count the global loss) each year I think we’d un-plug it and say, Fix The Toaster!

Here are some facts from one of my favorite sites the promotes safer driving:
FAST FACTS

Car crashes are the number one cause of death to young people. So, fed up with having to resort to yelling obscenities at passing moms as they sped past me while walking my son to school, I began to organize a community meeting. I typed up a letter and simply dropped it in 70 mailboxes while out for a walk.

But that was bettter then the 1 that showed last Summer at my first meeting. The best part was that one of the people was a reporter for the local news so the meeting got a great write up in the paper and more people have emailed me wanting to come to a meeting.
I’m telling you what I’m doing so that you too can make this happen.

I  bought 6 signs from Keep Kids Alive Drive 25 and sold some to people who came to the meeting. Signs actually have proven to be effective. 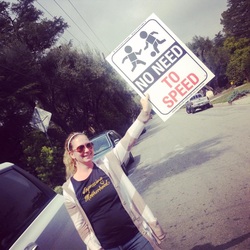 Here is a picture of Burbank Mom herself Jessica holding one that I gave her!

Did you know that Los Angeles holds the title of city with the greatest number of hit and runs in the country? Yes, it’s true and awful.

Here we are in gorgeous SoCal and it’s very dangerous to let our kids go out and bike and walk. Just recently in Burbank a woman was caught after a DUI hit and run.

I’d be interested in hearing if you feel like your neighborhood is safe for walking and biking?

If you feel like it isn’t, take action, hopefully I’ve given you a bit of information to get you going. Car crashes are mostly avoidable and we as parents need to make some big changes fast to change our sad statistics.

Lindsay Kavet lives in LA with her husband and three young children. She is an advocate for safe driving and started FixTheToaster.com after losing a dear friend to a senseless car accident. Lindsay is a Writer/Director and Producer and co-created Expressing Motherhood. She contributes to MomsLA, WhatTheFlicka.com and SheBuysCars.com. Connect with her on Twitter and Facebook.