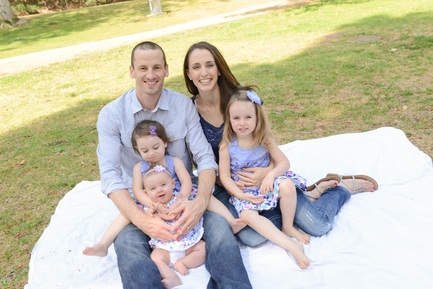 I have heard a lot of great birth stories, but this is one of the best from someone I know personally.

Tiffany Treat is the mother of three beautiful girls and wife to Jeremy. Last year, they relocated from Chicago to Burbank for Jeremy’s job. He’s a Pastor at Reality LA.

Tiffany is one of the most soft spoken, kind, courteous people I’ve met in a long time and when, through casual conversation, she shared with me her husband delivered their second baby in the front seat of a Honda Civic in Downtown Chicago, on Mother’s Day….well, I just knew I had to share this story with you.

Here is Tiffany’s amazing birth story. Her husband, Jeremy, had written this out shortly after their little Lauryn was born. Thank you for sharing this Treat family! 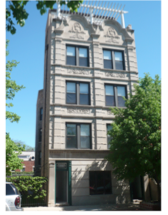 It started off a pretty normal Sunday morning.  I was making Mother’s Day breakfast for my wife Tiffany, our 18 month-old daughter Ashlyn was eating at her high chair, and we were planning on being out the door to church pretty soon.  Tiff started feeling some contractions, but couldn’t tell if it was “the real deal” because she had contractions (false labor) a couple days before.  Tiff called her doctor and her uncle Bob (also a doctor) trying to figure out if she was actually going into labor or not, all the while joking around and saying, “There’s a chance we might not make it to church today.”

The contractions were 12 or 10 minutes apart and the doctors had made it clear that we weren’t supposed to come in until they were consistently 5 minutes apart, so I kept making breakfast as Tiff paced back and forth, possibly getting ready for the long haul.  I called our neighbor Alison to let her know that later on in the day we might need her to watch Ashlyn.  But then Tiff had two contractions that were really strong and before I knew it she was on the ground crying in pain.  “Get me to the hospital!” She shouted at me.  “Okay okay,” I said, as I got the bag together and got Ashlyn ready.  Tiff went to the bathroom, and as I was gathering our stuff I heard the sound of gushing water, followed by Tiff shouting, “my water just broke!”  I called Alison, ran Ashlyn upstairs and by the time I came back Tiff was literally running down the stairs to get to the car.  “Tiff! Wait for me!” I said, having a hard time believing that my “ready to burst” wife was leaving without me.  So I grabbed our bag, caught up to her, and we walked across the street together.  But just as we walked around the back of our Honda Civic, Tiff started another contraction.

“The baby is here, Jeremy,” Tiff wimpered, as she braced herself by putting one hand on the car and one on me.  Unbeknownst to me, at this point Tiff could literally feel the head coming out, so she did what only a woman being driven by pain could do – began to lay down on the sidewalk and pull her pants down.  I tried to convince Tiff to let me carry her back ins ide but when she told me that we didn’t have time, I opened the door of the car and placed her in the front passenger seat.  I leaned her seat back, put her feet on the dash, and shouted “don’t push!”  You see, at this point I was still thinking we were going to the hospital.  I had remained pretty calm and cool; lots of people rush to the hospital for delivery, right?  But then I looked down, saw the head about 1/3 of the way out, and had my moment of realization.  “We’re not going to the hospital.  We’re gonna have this baby in broad daylight, right here on Polk St. in Chicago,” I thought to myself.  And just as I realized this I looked up and there were two people walking on the sidewalk for their Sunday stroll, and I thought, “I have to take her pants off.”  There was no turning back.  It was also at this point that our neighbor Alison, who was watching everything from the third floor window, saw the look of fear on my face and shouted, “should I call 911?”  “Yes!” I shouted back, and then braced myself for what was to come, one foot on the sidewalk and one in the car.

The next few seconds were probably the scariest of my entire life.  Tiff, screaming at the top of her lungs for as long as her breath would let her go, gave a big push and the head came all the way out.  Here’s the scary part: as soon as I saw the head, I could see that the umbilical cord was wrapped tightly around the baby’s neck and her face was completely blue.  The lifeless look on her face sent fear and adrenaline through every inch of my body I reached in to try to get the umbilical cord off her neck.  I grabbed it but it wouldn’t budge.  “If I pull on it too hard will it hurt the baby?  I have to get it off.”  So I wedged my hand inside of it, wiggled it off her head, and then yelled at Tiff like I never have before, “Push! Push! You have to get this baby out now!”  Tiff could sense the urgency in my voice, gave a big push, and out came a slimy, bruised, and blue baby.  When I caught her, I couldn’t tell if she was breathing or not, so in an instant (I didn’t have time to think throughout all of this, it was pure instincts) I did what I had heard before and spanked her to make her cry, so she would breathe.  It worked!  She cried!  Our little girl was breathing!  I held her up for Tiff to see, saying, “Tiff you did it!  She’s fine!”  I then laid her down on the floorboard, wiped her off with Tiff’s pants and cradled her in my arms.

Picture this: I’m standing over Tiff, one foot in the car and one on the sidewalk, holding this tiny baby, with the umbilical cord still connected to Tiff – and all of this on a calm Sunday morning in our quiet neighborhood (with a small crowd by this point).  Then I remembered what our doctor had done when Ashlyn was born, and I placed the baby on Tiff’s chest.  Within two or three minutes the fire truck showed up.  The EMT ran to the car and said, “the baby was already born?”  He cut the umbilical cord, wrapped baby Lauryn up in a blanket and handed her to me, and then attended to Tiff.  I held Lauryn on the sidewalk for about 5 minutes, until the ambulance arrived, and we all rode to the hospital, Tiff on a stretcher and Lauryn in my arms.

The first time Lauryn opened her eyes, the first thing she saw in this world was her Dad’s face in the back of an ambulance, riding through downtown Chicago.  When we arrived at the hospital they took us to the ER, where Tiff delivered the placenta and the doctors made sure Lauryn was alright.  Mom and baby were completely healthy.  Before we knew it, it was just the three of us sitting in our hospital room overlooking Lake Michigan, hardly being able to believe what had just happened. 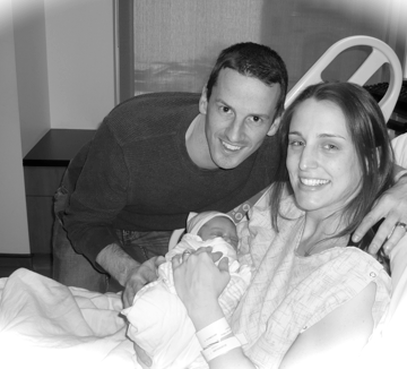 As I reflect back on that day I’m overwhelmed by the abundance of God’s grace in my life.  My wife is amazing!!!  I love Tiffany for who she is, and although this event certainly brought about a new and utterly unique circumstance, it did not bring about anything new with my wife’s character.  It revealed, rather, who she is and has always been: an incredibly beautiful and strong woman.  I’ve never loved my wife more than I do now, and I can’t imagine a greater woman to grow a family with.  For her strength, compassion, beauty, and love for God – I adore her, and long for nothing more for our daughter Lauryn than to be just like her mom.

And how gracious is our great God? The author and sustainer of life, the giver of all good things, the King who providentially works all things in accordance with his will.  From the minute that Lauryn was born we have given God all the glory for both this incredible story and the beautiful life that it resulted in.  Before we ever picked Lauryn’s first name (a couple days before she was born), we had decided that we wanted her middle name to be Hope, and here’s why.  Tiff and I have learned time and time again that in the midst of this broken world (evident from watching the news or just taking an honest look at your own heart), that our hope is ultimately in Jesus Christ and the good news that through Him, God has reconciled the world to himself.  Our hope is not in our own ability, not in career, not in what others think of us, not even in having a great family – our Hope is in Jesus.  And this story, the birth of Lauryn Hope, confirms that truth more than ever, to the glory of God.

Do you have an amazing birth story you want to share with us?! We’d love to hear. Birthing babies can be quite amazing. Email me at Jessica@burbankmom.com!

Wanna see what #Michigan weather is like? The fi