It’s back! I love having Flapper’s here in Burbank. My husband and I go frequently for date night…but the girls and I have used it for a night out as well. Flapper’s is known for many things, including their annual Comedy Festival.

The festival opens this coming Sunday night, August 16th. It will run through the 22nd. Tickets are now on sale!

Let’s start with what’s geared toward our kiddos:

This high-energy class for ages 8-13 will introduce youngsters to the basics of improv comedy. Kids will learn how to play basic improv games, think on their feet, and work together to create scenes from a suggestion. This special one-day introductory workshop will be taught by Sara Cravens, a character actress, improvisor, and comedy writer trained by The Groundlings. This class is a three hour class and the fee is $49. (LINK)

Comedian and juggler Michael Rayner (Sesame Street, David Letterman) will host a family friendly comedy show where everyone, young and old, will be laughing. Two Milk Minimum will also feature Vicktor Aggerwhil, a 17-year old standup comedian who trained at Second City, Sydney Feyder, another 17-year old also from Second City, and Neil Aggerwhil, a 13-year old who has been doing comedy for two years, and has performed at The Hollywood Improv, Flappers Comedy Club, and The Warehouse in Marina Del Rey. The cost of this event is $10 (LINK) 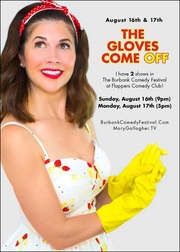 Now, on to the adults. This festival has something for everyone. I was glancing over the schedule and I’m not joking, they have sessions titled, “Parks & Wrecks,”  “Jokes For Jews,” “Psychic Stand-Up,” Hawaii 5-Bro,” “Ladies of Laughter” and  something I’m looking forward to, “The Real Housewives of Comedy,” featuring a friend and fellow BurbankMom, Mary Gallagher. (You’ll love Mary). Visit Mary’s amazing website HERE…

There is so much comedy going on during this festival. Not just stand-up but classes and panels too. For a full schedule or to purchase your tickets, CLICK HERE.