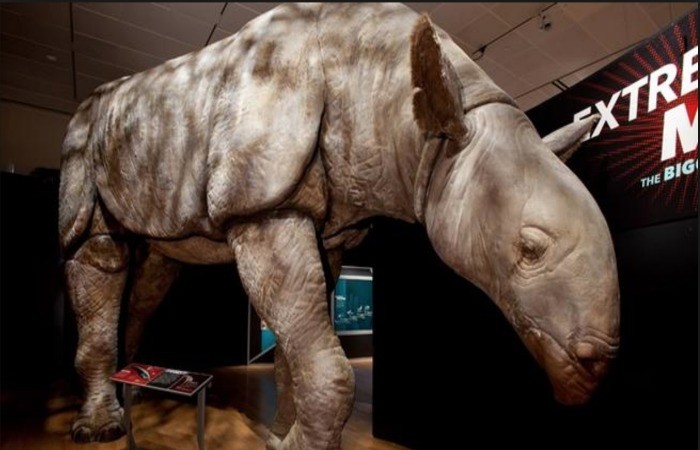 Our Natural History Museum has been voted one of the top ten family museums in the country! And there’s great reason…becauw they rock. The NHMLA never disappoints with the exhibits they bring in for our SoCal families.

The Natural History Museum of Los Angeles County brings the exciting temporary exhibition Extreme Mammals to Southern California from May 14-September 10, 2017. Organized by the American Museum of Natural History, the exhibition explores evolutionary standouts and oddities in the 200-million-year history of mammals, and introduces animals that many visitors will have never heard of or seen. Withrare fossils and specimens from around the world, vivid reconstructions, video installations, and hands-on activities, the exhibition examines the ancestry and evolution of species ranging from massive Columbian mammoths and walking whale ancestors to miniscule mammals that weighed as much as a dollar bill, and from speedy cheetahs to super-slow tree sloths.  In addition to the animals themselves, the exhibit also marvels at remarkable features and adaptations these animals have evolved over time — over-sized claws, ferocious fangs, trunk-like snouts, and huge, complicated horns.

Tar Pits highlights in Extreme Mammals include an exploration of North American “big cats,” ranging from the hyper-specialized saber-toothed cat, to the biggest American lion, to the least specialized mountain lion, the only one of the Ice Age’s big cat species to have survived in modern day Los Angeles. Of particular resonance to Angelenos, Extreme Mammals will also present a feature on L.A.’s own P-22 (image left), the Griffith Park mountain lion.

Also featured is the Channel Island “pygmy mammoth,” a dwarf species evolved in isolation during the Ice Age.  About half the size weighing only one quarter of its mainland ancestor, the Columbian mammoth, this is the most prominent example of island dwarfism in North American extinct elephants. Pygmy mammoths faced limited resources while “locked” in small islands after sea level rose, resulting in the species’ distinctive and exceptionally small size.

L.A. County Residents receive a special discount when they purchase a ticket that includes Extreme Mammals. $2 off of Adult, Senior, and Student tickets Monday-Thursday.

Wanna see what #Michigan weather is like? The fi