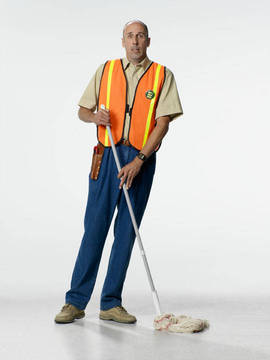 Bob Clendenin in 10 Items or Less

You have probably seen Bob Clendenin in many, many things. He’s one of those actors whom you know you know his face, but don’t know his name.

His name is Bob. He’s very funny, recognizable and down to Earth. He’s also a very involved Burbank Dad and he happens to live in my neighborhood.

I first met Bob about 7 years ago while shopping at our local Ralph’s. We had just moved into our new house and I was shopping with my 16 month old daughter. I was on the phone with my mom in Michigan and saw him in the produce department looking at tomatoes. I said to my mother, “Mom..there’s this actor guy here. You’d totally recognize him.”

Right then, I watched him as he had a Charlie Chaplin moment with those tomatoes. He grabbed one and about 10 fell. He reached down to pick them up and he kicked one straight across the floor to me. I picked it up, handed it back and laughed.

I rattled my brain the rest of the day as to where I had seen him last on television.

It was The Closer. 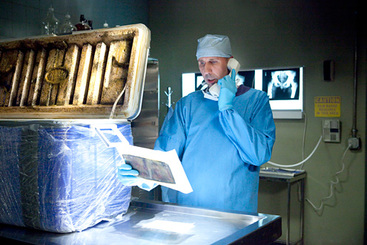 Bob as Terrance in The Closer

I IMDB’d The Closer and found out who he was. Within a few days, I saw him and his son at Quiznos. As he was leaving, I said, “Excuse me? Aren’t you Bob Clendenin?”

“Yes! Yes, I am.” He said. I could tell I completely shocked him.
“I just saw you in The Closer…you’re very funny.”

“Great! Thank you.” He replied, grabbing his son’s hand and exiting with sandwiches in tow.

I started seeing him in my new new neighborhood walking with his wife, children and dog.
Oh, boy…I was officially stalking him. Or at least, that’s what it felt like.

His family is amazing. They saw we were new in the neighborhood and befriended us right away. The rest is history.
Bob and his wife are some of our closest friends here. They have been with us through the birth of two of our three children, with us when my mother died and I cant tell you how many items one of us has needed, and the other has had!

You can see Bob most frequently riding bikes with his boys, throwing balls with them in the front yard, attending PTA meetings and creating some fan-freaking-tastic wood furnature, including building his kids’ bunk beds by hand. He could give Pottery Barn a run for their money. Having graduated from both Cornell University and Penn State, Bob is one of those ‘smart’ people. He has some major intelligence behind his comedy…and based on some of his kid’s school projects, I’d say they are as bright as he is.

Currently, you can see him on Cougar Town…which has been renewed for season 5 by the way!

People like Bob and his family help make Burbank what it is…inviting, fun and family friendly.

What I really want to share with you, however, is the latest Got Milk commercial….featuring none other than Bob Clendenin. I just have to……