An Open Letter To The Burbank Parks & Rec Sports Department...And Everyone Else Too, I Suppose.  | Burbank Mom 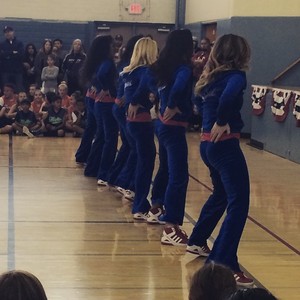 Dear City of Burbank Parks & Rec Program Coordinators
(And anyone else who wants to read this),   Whoever decided it was a good idea to bring in the LA Clippers Cheerleaders/Dance Team to entertain our elementary students…well, that was a boneheaded move. Not just boneheaded, but uncomfortable and do I dare say…contrary to the self esteem and self-respect sports in general teaches our young boys and girls? The reason I say this, is not because they were the cheer/dance team, nothing wrong with cheer or dance teams, but because of the manner in which these women danced for our children.

I’m normally someone who sees any glass more than half full. As a matter of fact, I have a hard time reviewing anything in a negative light, because I just choose to see the bright side in whatever I can. (Thank you, mom) But this past Saturday, my daughter and her basketball team went to the youth basketball program awards to accept their team sportsmanship award (which they had to wait an hour and 15 minutes to receive, when all other teams were gone…you know, sportsmanship award? The one that’s probably more important than any other award in sports…but that’s another letter, I presume)

As we sat in the gymnasium at McCambridge and waited, the girls thought they were headed to some kind of LA Clippers Party. Now, I know things change behind the scenes, and sometimes plans have to adjust to meet the needs of the situation. Maybe that was the case? Maybe?  Did not one person say, ‘Maybe we could find a former NBA or WNBA player?’ Maybe you did and they couldn’t come?

Now, before I move on, let me make it clear, I understand the women who choose to cheer or dance for teams like these are grown women and make their own decisions. But in the wave of all the hard work that women (and men) have put into getting women the right to vote, the jobs that they’re capable of and deserve, the respect to stay home with children and rock it, and most recently closing the wage gap, a choice like this from the sports administration in our city was disappointing.

Our girls will not see themselves as more than sexual objects if we don’t stop flaunting women as sexual objects in their faces. This goes also for all men and women who are undermining the work done by these people in history. Don’t even get me started on the latest issue of Sports Illustrated.

And also just as important…what in the world is this teaching the young men in that room? You know the 7-15 year old boys who were all walking around with signed posters of these women?

I adore you Parks & Rec. I think Burbank has one of the best, if not THE best, departments in the area. I am just a mom who’s asking you to reconsider allowing something like this to happen again.

And really, thank you for a wonderful season of basketball, all the work your team puts in to scheduling, ordering awards, organizing officials, scorekeepers, opening gymnasiums and everything else you do.

FOLLOW @BURBANKMOM
Getting 2021 settled in... and so far it’s an un

[#ad] If you don’t have the #ChristmasStory mara