If you like to talk to tomatoes….If a squash can make you smile…

I remember walking into a children’s book store way back when, looking for a Christmas gift for two young cousins I helped take care of. I found a stuffed tomato and cucumber and remember thinking, “Who’s going to play with a tomato?”

Apparently, a lot of people.

20 years later, Veggie Tales is still here and my kids are still fully in love with Bob & Larry…Pa Grape, Jr. Asparagus and all of the characters most of our kids know and love.

Many changes have happened in those years since Phil Vischer & Mike Nawrocki first developed the “Big Idea” that created such a powerful series in 1993. Veggie Tales is a faith-based children’s program that has always based their stories on important, very essential, life lessons like, sharing, jealousy and name-calling to Bible stories about Jonah, Daniel, Shadrah, Meshach & Abednego…or as Veggie Tales calls them, Rack, Shack and Benny. 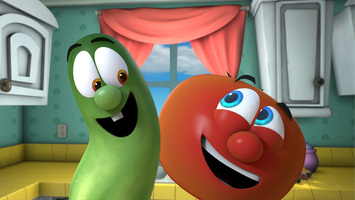 The writing on this show is creative, to say the least. If you’re already a fan of this program, you surely know all of what I’m saying. I have friends who don’t practice any faith who’s children love these armless, legless vegetables. (Technically, fruit..but that’s neither here nor there)
I mean, how can you resist Silly Songs With Larry?!

This week I had the huge pleasure of speaking with Mike Nawrocki via phone about the newest Veggie Tales adventure. Mr. Nawrocki voices Larry The Cucumber and many more characters beyond that.  Big Idea Entertainment is premiering a brand new original series for Netflix on November 22nd.

Get ready for Veggie Tales In The House.

He continued, “Our DVD titles have been on Netflix for a long time and they do well. It

will still have a very strong faith base, helping parents pass on biblical values with this resource. That will continue in the new series…Netflix has been very welcoming to us and our message.”
There are, however, some changes. I am a big fan of change, but it might take me a minute to adjust to the new look of Bob, Larry & friends. And even bigger…the theme song! It’s changed. AHHHH. I’m not sure I can personally handle this. But I’ll be patient because, well, I’m a fan of the show. 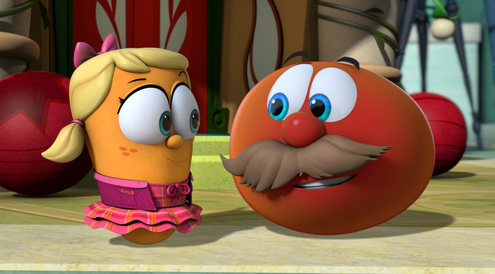 “Rigging has changed over the years. The next decade with veggie tales is appealing to a whole new generation of kids. They have a great design & animated with more expression.” Says Mike when I asked about how he thinks the loyal audience will respond to the new veggies.

I’m excited to see what the next adventures bring for these guys!

You can watch some clips below of the new Veggie Tales Series. 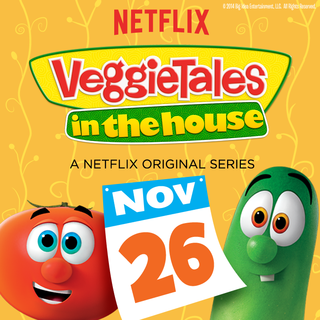