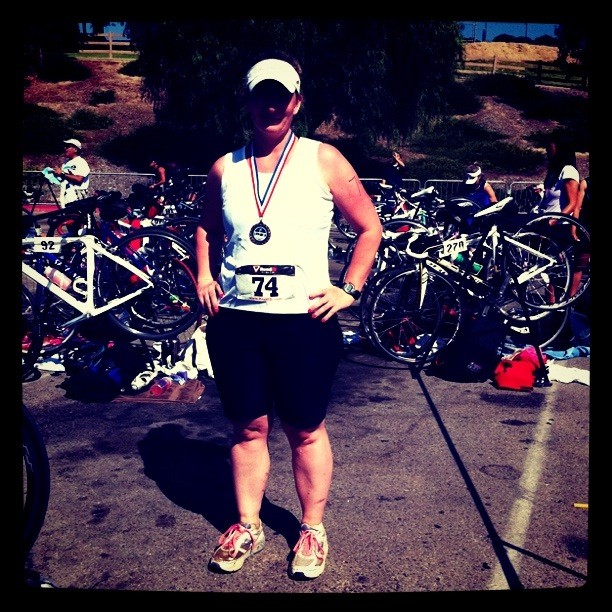 Several months ago, I signed up for my second sprint triathlon. I then should have promptly changed my middle name to “ridiculously optimistic” Or better yet, “stupid.” I have no idea why I like to punish myself in these kinds of ways, but I do. And it seems to be a pattern for me. I had full intentions of (using my best and most forceful air quotes) “training” for this one. I had completed my first sprint triathlon in 2008 while visiting Michigan during my mother’s chemo treatments. I say completed, but what I really mean is “didn’t die.” (Again with the air quotes.) I consider myself an athlete, so the first time around I thought, ‘oh, well, I can swim…and ride a bike…and run…so, let’s do a triathlon!’

I found out how wrong I was 50 feet into the swim portion of that very first triathlon. The only person I beat out of the lake was an 80-year old woman…and not only was she on my heels, but she started two or three waves behind me. Luckily, the part of the country where I participated in that initial Tri was as flat as any performance Rene Zelweger has done. With the exception of Chicago, actually. I really do like that movie.

The flat land made it easy for me to catch up on the bike and trot through the run to cross the finish line under 2 hours. I was completely satisfied with myself but floored at how difficult that triathlon thingy was.

Then I discovered my left ACL reconstruction was torn. And the meniscus in that knee was deteriorated leaving my bones from my femur and tibia to make nice together in a little dance we call arthritis. Oh..and having three children really puts a damper on any regularly scheduled exercise. And… I still couldn’t swim.

Hmmm….I’m not sure how, exactly, I thought this was going to go, but the ridiculous optimist in me thought it would ‘all work out.’ So, I borrowed a road bike from a friend, I started getting up at 5am to sneak in a jog or a ride and a really sweet neighbor offered to go to the YMCA with me to give me instructions on how to swim effectively.

All good in theory, yes. But the 5am workouts only happened when my knee cooperated and I wasn’t completely exhausted from the day before. Those celebrities who go to rehab for ‘exhaustion’ have nothing on mothers. Nothing. I say they’re wussies. Ok, not wussies…actually kind of smart, really. I’d totally go away for a while due to ‘exhaustion,’ if I could. Going to the YMCA with my neighbor happened only about four times due to schedules. It was enough time for me to learn what to do, but not enough time to actually practice doing it. Those pesky kids and their needs…if they hadn’t gotten in the way, I’d have reached my goal! Grrr.

Cut to this past Sunday morning. Event day. Five months after I signed up, I packed my bag and left at 5am with all of the things you need for a triathlon… towels, running shoes, shirt, bib number, visor, chip timer, helmet, water bottles, protein and carbs. I was prepared. I had even switched to clip in shoes on the bike and was comfortable using them. From the outside, I totally looked like I knew what I was doing. On the inside, however, I was terrified but ridiculously optimistic.

Donning a purple swim cap signifying I was between the ages of 30 and 39, I stood surrounded by other purple caps who were surely going to leave me in the dust. Why was I here? I had no business doing this, I certainly didn’t train and saying I’m not a strong swimmer is an understatement. Here’s the thing… I didn’t care. I just wanted to finish alive. There was no way I was going to quit, because well, I just don’t ever quit. When the horn sounded and the mass of women ran into the water, I prayed to God to give me the strength to finish. Within just a few feet of the start I knew, once again, how difficult this was going to be. And it was.

I was comforted by the fact that I was not the slowest one. Five other purple caps struggled right along with me. I went from swimming on my belly to the backstroke wishing I could just float in on the waves from latter heats of women passing me. No such luck, but what actually happened to kept me going, was the drop out of those other purple caps. One by one, they all yelled for help and were escorted via lifeguard to the side of the lake for an exit from the event. By the halfway point, there were two of us left.  I had a lifeguard on a surfboard following me the entire time asking every 4 minutes if I was ok. So, other than looking like I needed help, I didn’t drown and I managed to keep the vomit down.

Somehow, in my struggle to swim, nausea set in. But still… I didn’t quit. I couldn’t. Oh, dear Lord, why did you give me the father I have? There was no way I would ever be able to tell my Dad that I quit. Curses. I had to finish that swim. After I turned around the last buoy, I had a clear sight of the finish. And with God’s good graces, I did not die in my 22 minute swim. Yes, 22 minutes. Most finished it in 12.

It took everything I had to walk up out of that water and not stop. I wanted to sit down right smack dab in the lap of that event photographer who was probably getting the absolute most unflattering picture of me. Somehow my mind convinced my legs to move in a fashion that could be considered a jog… or a seizure, call it what you want. I had plenty of room to get ready for my bike, since everyone around me was already gone. I put on my socks, grabbed my shoes, clipped on my helmet, took a big bite of a protein bar and with bike in tow, ran out of transition.

I mounted the bike thinking this was going to be the easiest part, as if sitting on a seat the size of a Kit Kat for 11 miles was somewhat of a rest before I had to run a 5k. I was shaking, tired, hungry, wishing I had a pillow and a blanket and the pain of having to pee was overwhelming. Why was I here? I had no business doing this. 10-year old boys and 80-year old women were passing me on BMX’s and mountain bikes.

I have never, ever wanted to stop moving so bad. You see, a Southern California event is full of lots of things that make me cringe, including very fit people and hills. I actually used the first half of the bike to rest and ride easy and once I caught my breath and had water, I found my second wind. I was able to change the gear and speed up, passing several people who had left me behind a while back. But I still had to pee. I tried to convince myself to just pee in my pants. “Just let it go, Jess.” is what I was saying over and over. I would have peed my pants, intentionally, if I could have. My body was so mad at me already, cooperation was not happening. Darn that potty training.

After 50 minutes and a beautiful ride over Hansen Dam, I was back at transition. I dismounted, shook out my body and headed to get my running shoes on. On my way out of transition and into the run, I was hoping to stop by a porta potty, but it was in an area I couldn’t get to. Those first few minutes of running were hell. Absolute torture. What was I doing here?!

My bladder felt like my stomach does normally on Thanksgiving. I tried to pee my pants again, but it just wouldn’t work. The 5k was a trail run and at many points we were running in sand. As if I weren’t moving slow enough, now I had fight with sand to make it look like I was moving backwards… or in super slow motion. I was so exhausted that I was getting annoyed at the shoe prints I was following. Have you seen those barefoot shoes? The one’s that hug your toes? Annoying. Someone in front of me had them on and I was disgusted. Who actually wants to wear something in between your toes?!

Ironically the pain in my bladder was soon replaced with the pain in my right foot. Apparently, one of my toenails was a wee too long and started scraping the inside of the toe next to it. Have you ever tried to run while clenching your toes? And I thought sand was my problem. Suddenly, those huggy barefoot shoes that would keep my toes separated seemed alright. The run turned into a run/walk/run/putter/recommit to Jesus/walk until the midpoint when I felt rested enough to continue. 45 minutes after I started the run, I saw the finish line.

I promptly took my medal, ate an orange, a banana and a bagel, said bye to a few new friends (who made it all look too easy) and headed for my bike to pack up. As I walked back to my belongings, I was absolutely satisfied. My knee never gave out, I had not quit and for being 30 pounds overweight with very little training, I didn’t do as bad as I expected.

I suppose being ridiculously optimistic pays off.